This is a thread for discussion of specific Covid-related happenings here. We’ll move broader discussion or criticism away from here. The Open thread is available for that–as well as any other discussion of developments people choose to have there–posts won’t be moved from there to here. We’ll see if this is wanted and how it goes

This Open thread is available for discussion of Taiwan-related Covid matters, including recent developments. We might move posts to more specialized threads, but it’s up to anyone if they want to post about developments here or in the Specific Developments thread.

As an example of what I’m thinking, if a new regulation that masks must be worn in the bathroom on alternate Tuesdays in Chiayi is announced, the specifics of that measure are fair game, but not masks in general, fascism in Taiwan, etc. If the latest daily case numbers are posted here, that’s fair for discussion, but not if Covid actually exists or is actually much more prevalent than the numbers suggest, if government measures in general are desired at all, if Zambia has adopted a superior approach, etc. Just tossing out some crazy examples here. This is a test

Why Tuesdays? Why not wednesdays?

Anyhoo….feelings on todays number? Are we going high? Is this the big jump? Three cans of baked beans in my weekly shop or four? The command center said that the new local cases today were 45 males and 59 females, aged between 5 and 80, as detailed in the attachment to the press release.

The command center explained that today’s new cases of immigration from abroad are 71 males, 59 females, 2 cases under investigation, aged between 5 and 70 years old, 23 cases in Indonesia, 13 cases in Vietnam, 9 cases in Thailand, 7 cases in the United States, 4 cases each in Hong Kong and Singapore, 3 cases each in Malaysia, South Korea, the Philippines and France, 2 cases each in Italy, India and Switzerland, 1 case each in the Czech Republic, Finland, China, Japan and the United Kingdom, and 49 cases are under investigation middle. The entry date is from February 22 to March 31, today (2022); please refer to the attachment to the press release for details.

According to the statistics of the command center, up to now, a total of 7,033,816 new coronavirus pneumonia-related notifications (including 7,009,862 excluded) have been reported in Taiwan, of which 23,629 were confirmed, including 7,602 imported cases, 15,973 local cases, 36 Dunmu Fleet cases, 3 aircraft infections, 1 case is unknown and 14 cases are under investigation; there is no new case of empty account, and a total of 136 cases have been removed as empty account. Since 2020, a total of 853 COVID-19 deaths have been reported, of which 839 are local. The counties and cities where the cases reside are: 413 in New Taipei City, 322 in Taipei City, 29 in Keelung City, 28 in Taoyuan City, 15 in Changhua County, and 15 in Hsinchu County. 13 cases, 5 cases in Taichung City, 3 cases in Miaoli County, 2 cases each in Yilan County and Hualien County, and 1 case each in Hsinchu City, Nantou County, Yunlin County, Tainan City, Kaohsiung City, Pingtung County and Taitung County; 14 cases were imported from abroad.

The command center once again calls on the public to implement personal protective measures such as hand hygiene, cough etiquette and wearing masks, reduce unnecessary movement, activities or gatherings, avoid entering and leaving crowded places, or areas with high risk of infection transmission, and take the initiative to be proactive Cooperate with various epidemic prevention measures and jointly strictly guard the community defense line.

Cats well and truly out of the bag then.

Wow, triple digits again. Might turn into a longer than expected holiday…

Anyone know why they still report this number so prominently? Don’t think the virus seeks out one gender over another.

In yesterday’s presser, Chen said he didn’t see need for other cities to send residents quick tests. That may soon be updated after this weekend.

Does that mean they’re nuking Keelung?

If things get out of control I envision a scenario in which short term we lock down again like last May (don’t say “it’s not a lock down”), but long term they give up and reopen their borders like Australia or New Zealand when they can’t control it. If death rates stay low, I don’t see them going the way of Hong Kong or Shanghai.

but long term they give up and reopen their borders

Like Thailand, no testing required until you arrive. But what happens if you test positive on arrival? Quarantine in a Thai massage parlor?

The worst thing about Thailand is you can test negative on day one, then go out.

But! They then test you again on day 5 and if you’re positive, off to the expensive quarantine hotel for you!

Total scam and the reason I’m not going back there yet.

New Taipei had the highest number of new domestic cases at 40, followed by 20 each in Taoyuan and Keelung, and 12 in Taipei. 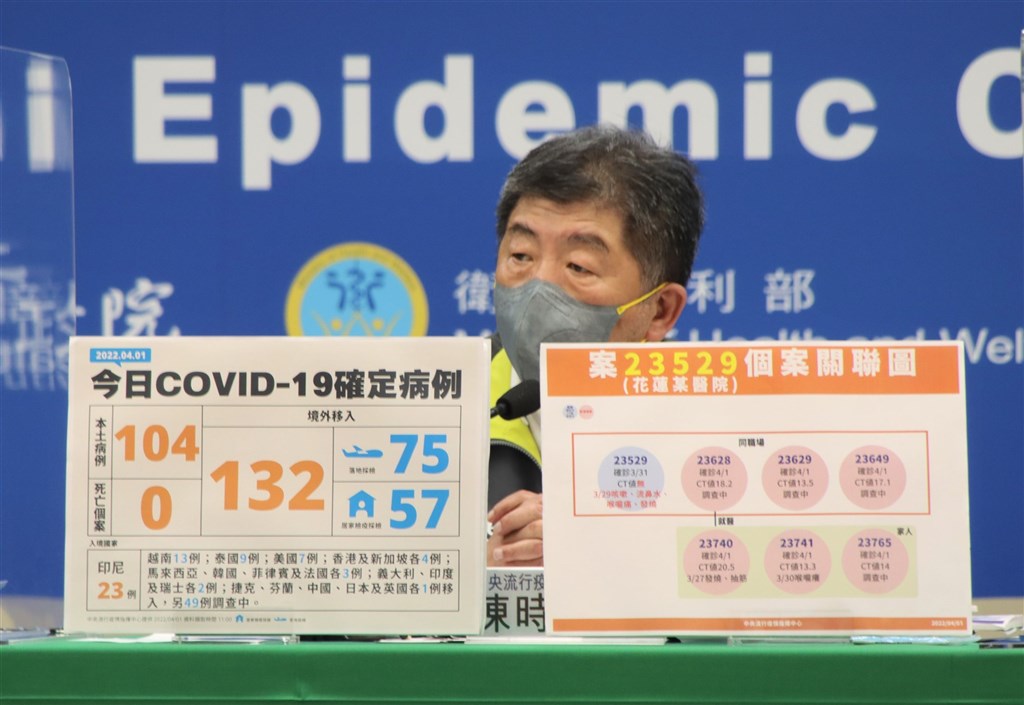 Taipei, April 1 (CNA) Taiwan reported 236 new COVID-19 cases on Friday -- 104 domestically transmitted and 132 that originated abroad -- and no new deaths from the disease, according to the Central Epidemic Command Center (CECC).

3 posts were merged into an existing topic: From coronavirus

My company’s preparing for WFH next week. Just checked the weather forecast and I’m suddenly quite keen. Mojitos on the balcony. Fat Freddy’s Drop on the beatbox.

NTC is kind of vague, it’s a big place.

At the cram school I work at, no one mentioned anything. No kids or teachers said anything. People don’t give a shite anymore.