After being so upset with the immigration laws in Taiwan and the discrimination and difficulty for citizenship, I have decided to write to the policy makers, senators etc. In my research I have stumbled upon Li-Chan Lin, a woman who is the first immigrant law-maker in Taiwan. Have anyone heard of her? Her history and what she fights for? She is a KMT party member so I don’t know how open she is to stand for real useful immigration law, or if she is just a remedy to shut mouth foreigners up by the KMT.
By what I’ve read her main focus is immigration and immigrants support. Any information would be useful.

Also, how many of the affected foreigners here would be willing to write to law-makers voicing their immigration concerns? Or how many have already done that? Or have heard of any other policy maker involved in changing immigration laws for the better.

I also came across Hsiao Bi-khim 蕭美琴. It seems her work is focused on citizenship rights, immigration and marriage equality. She is a DPP party member. 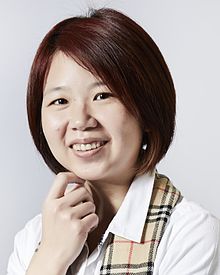 Lin Li-chan (Chinese: 林麗蟬; pinyin: Lín Lìchán; Khmer: លីន លីចាន់; born 2 October 1977) is a Taiwanese politician of Cambodian descent. She was the first immigrant to Taiwan to be elected a member of the Legislative Yuan, on which she served one term, from 2016 to 2020. Lin was born in Cambodia to an ethnic Chinese family of Teochew descent. She is a naturalized citizen of Taiwan. Her father died in a traffic collision, and, when she was 20, her mother married Lin to a Taiwanese man, Hsieh Shui-c...

I am writing in English, so first names first, family names last.

Wake me up when a clearly non-asian/huaren gets elected.

For that to happen the non-Asian would have to give up their own citizenship first and be willing to accept the non voting 10 year period after that, the non going abroad criteria and a bunch of other nonsense. And then fight for Taiwanese people in the senate. As the NIA numbers show, 92% of people willing to do that are Vietnamese (put up with the nonsense and lose their original passport), and the rest all Asian.

I think 70% of all nationalised immigrants are from Vietnam. 90% come from three countries. 91% of all nationalised immigrants are female.
It’s a big hurdle to climb, this lady probably spoke some Chinese but not much. We have to give her kudos for her achievements.
Having an Asian face just makes integration ten times easier (because there’s no initial judgement on sight) although still not necessarily that easy for Asians either given this is an island wiith a very distinct identity (even if not sure if ROC or not ).

Is it not can’t stand for election for ten years ?
Even then it’s a pretty shitty rule.

I stand corrected, you can’t be elected for 10 years or have political participation

Nongovernment advocacy groups such as Forward Taiwan have been presenting our case—and arguing that it is in Taiwan’s interest to reform and treat us better! To their credit they have had the ear of the National Development Council folks, who in turn have proposed policy changes that have in turn been adopted by the Legislative Yuan.

Honestly I’d think that in the current environment contacting Forward Taiwan with our concerns may in fact have a better chance of eventually getting results than contacting individual law-makers, who after all do not represent us as we do not/cannot vote.

Great information. I will definitely contact them. I will list the major concerns and put them here. For those who want to contribute please list yours too.

The NDC and MOE seem to have been behind the push to loosen ARC restrictions . But we need political or societal backing too to change dual citizenship laws and open more. But absolutely.rightz no vote means they don’t care generally. Chinese spouses got preferential treatment cos lots of votes and strong advocacy…

Before writing to them, I’d advise you to take some time to see what they’ve been working on so far. This may give you more context to better frame your proposed changes. Hope this works out!

Surely will do. Thanks a lot for leading to them.

The NDC and MOE seem to have been behind the push to loosen ARC restrictions .

NDC yes. But the MOE? My goodness, I assumed they were too busy muddling through the National Taiwan University President election debacle!!!

Thanks a lot for leading to them.

Not a problem! Keep us posted on what you find.

That makes more sense. As far as I can gather, Taiwan’s MOE is one of the absolute last government or nongovernment agencies I would expect to be promoting our interests!