No Cricket jokes, either

Well, mad enough to marry Neil Young, at least. Hmmm, I don’t think I’ve seen any of her films, which is odd since she’s been in a lot of them.

That’s really sad for him to lose his parents that way.

Dead at 106: the Oldsmobile

Tony Randall, the comic actor best known for playing fastidious photographer Felix Unger on “The Odd Couple,” has died. He was 84.

Randall died in his sleep Monday night at NYU Medical Center of complications from a long illness, according to his publicity firm, Springer Associates.

He is survived by his wife, Heather Harlan Randall, who made him a father for the first time at age 77, and their two children, 7-year-old Julia Laurette and 5-year-old Jefferson Salvini.

Randall won an Emmy for playing Unger on the sitcom based on Neil Simon’s play and movie.

(read more at the site below)
entertainment.msn.com/tv/article … ews=158702

The Odd Couple is easily one of the top ten T.V. shows of all time and largely due to him. I treasure every moment of those shows. (If only Nick at Nite were on the cable system here.) He was a national treasure. People like him deserve the good fortune of dying in their sleep. R.I.P. Tony.

[quote=“cableguy”]
He is survived by his wife, Heather Harlan Randall, who made him a father for the first time at age 77…[/quote]

Rest in eternal peacefulness on the other side of paradise.

Since there’s no “People Who Were Resurrected 2004”, I put this here:

I shouldn’t be so gullible next time.

Oh well. A good hoax while it lasted.

That’s really funny anyway. I’m surprised you got fooled by it though. Wishful thinking, I guess.

Drinking a beer with every meal is the secret to long life.

Last widow of a Confederate civil-war veteran dies at 97.

MONTGOMERY, Ala. - Alberta Martin, the last widow of a Civil War veteran, died on Memorial Day, ending an unlikely ascent from sharecropper’s daughter to the belle of 21st century Confederate history buffs who paraded her across the South. She was 97.

Martin died at a nursing home in Enterprise of complications from a heart attack she suffered May 7, said her caretaker, Dr. Kenneth Chancey. She died nearly 140 years after the Civil War ended.

Her May-December marriage in the 1920s to Civil War veteran William Jasper Martin and her longevity made her a celebrated final link to the old Confederacy.

“She was a link to the past,” Chancey said Monday. “People would get emotional, holding her hand, crying and thinking about their family that suffered greatly in the past.”

The last widow of a Union veteran from the Civil War, Gertrude Janeway, died in January 2003 at her home in Tennessee. She was 93 and had married veteran John Janeway when she was 18.

Martin said her husband never talked much about the war, except the harsh times at Petersburg, Va.

“He’d say it was rough, how the trenches were full of water. They were so hungry in Virginia that during the time they were fighting, they had to grab food as they went along. They came across a potato patch and made up some mashed potatoes,” she said.

Alberta Martin is to be interred at New Ebenezer Baptist Church six miles west of Elba, in an 1860s-style ceremony following her funeral June 12.
[/quote] 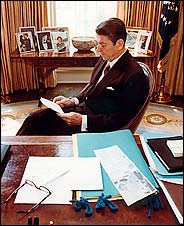 Ronnie! What a shock.

A hell of an actor.
He made Don Corleone.